Never Underestimate How Much a Stock Can Run

One of the hardest mental obstacles to overcome when trading is recognizing that stocks can still run higher when they already seem overextended. Common sense tells you that the stock has already seen its run and is ready to come down. Even if it doesn’t come down, it doesn’t seem very likely that it will move up much further. Consequently, common sense is hindering your trading strategy in these circumstances. The market doesn’t operate around common sense, which is proven by the massive amount of companies that are both over and under valued. So, if you can’t turn to common sense, what do you do? Try to eliminate your preconceptions of how you believe a stock will act and utilize a more concrete strategy. Refer to your trading rules and let them guide you through the trade.

Today, I was faced with a situation where I didn’t take my own advice. This ended up costing me a lot of money, however, I learned a lot from this trade. Earlier in the morning, a stock called HDY (Hyperdynamics Corporation) popped up on my stock screener. Hyperdynamics Corporation  had released news that a force majeure had been lifted from their contract with Tullow, meaning that HDY’s petroleum operations may be able to continue in the Republic of Guinea. From a fundamental standpoint, this didn’t seem like huge news to me, but I added it to my watch list for the day and waited for the perfect technical setup.

That setup came around 12:15 PM (market hours) when the stock broke through a key resistance level. 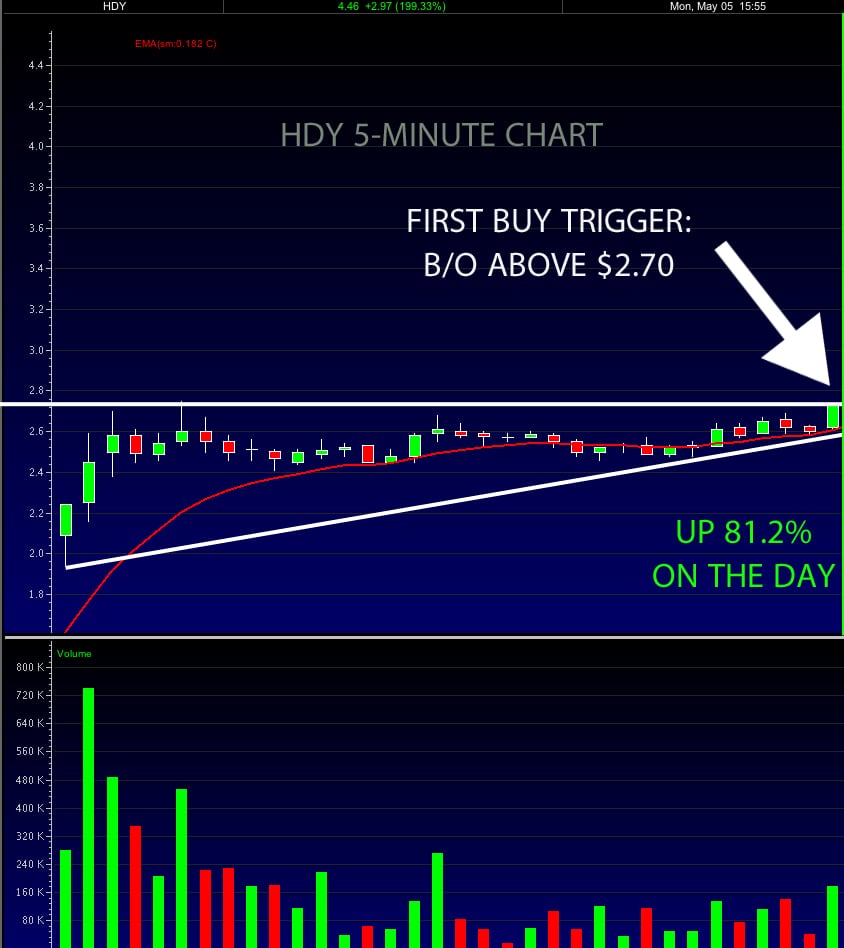 A large part of my intraday trading strategy is trading ascending triangle chart patterns. I use other indicators as well as some fundamental analysis, however, anytime I see an ascending triangle chart pattern, I become interested in the stock. That being said, HPJ was already up 81.2% on the day and I didn’t believe the news was good enough to justify the run. Because of that, I refrained from trading this perfect setup and carried on with my trading. As you probably guessed, the stock continued to run throughout the day with very little resistance. HDY made it all the way to around $4.12 from the breakout trigger at $2.70. So, by now, the chart must be overextended, right? Wrong.

Around 3:15 PM (market hours), another perfect ascending triangle was formed and the stock was ready to breakout yet again. By this point, I wasn’t even considering trading the stock considering it was up over 176% on the day. I assumed there would be some strong selling towards the close as people locked in their gains from a nice intraday run. Once again, common sense failed me. HDY was setting up another ascending triangle pattern and when it broke the $4.12 resistance, the stock ran from $4.12 to as high as $4.56 making the gain for the day 206%. The stock eventually pulled back to $4.44 at closing, however, that price would still provide for a nice intraday gain from the $4.12 breakout point

So, what exactly is my point here and why am I going into so much detail about a trade I didn’t even execute?

The point is to always challenge your unsubstantiated beliefs about the market. Always ask why and see if you have a solid rationale. Stocks won’t always have parabolic movement like HDJ, but it is important to have a solid reason as to why you don’t believe a stock will go higher. Here are some examples of good and bad rationale:

Nahh, it’s already up too much on the day. I doubt it can go higher.

It’s just up too much, so I doubt traders will push the price up further.

Well, the intraday setup is perfect, however, the stock is approaching a long term resistance level that it has struggled to break in the past. Volume is fading a bit and the stock keeps falling below the 10-day EMA. The nearest support level is 50% below the current price, so the risk/reward ratio is not very appealing.

Notice that both of the responses come to the same conclusion, however, one provides solid rationale and the other doesn’t. Understanding why you are or are not placing a trade is crucial, as it will help you survive in the long run. Even if the fictional stock from the above example were to breakout, if you stuck to your trading rules it would be more difficult to regret not purchasing the stock. Sticking to your trading rules can cost you profits sometimes, however, they will save you from losses a lot of the time.

For today’s trade on HDY, I had no solid rationale behind my decision. Around the time of the first breakout, HDJ had just crossed above the 10-Day EMA (another indicator I use), volume was picking up, and an intraday resistance level was broken. The chart was screaming “BUY!” but I replaced my trading rules with common sense. The market doesn’t always reward common sense, so you need to be prepared. HDY ran about 200% today. Did the company really become 3 times more valuable today than it was yesterday? Probably not. Did the market care? Obviously not. Never underestimate how much a stock can run. Stick to your trading strategy and rules and react accordingly. In regards to HDY, I should have placed my order at the breakout level and then monitored the stock closely. If the stock dropped and I was wrong about the breakout, I could cut my losses quick and move on. If the stock kept moving the way I wanted it to, I would hold it until I believed it was a good time to sell; simple as that. 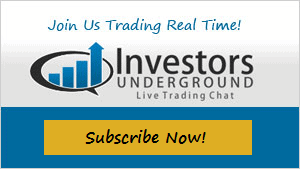